Which form of transport has the smallest carbon footprint?

Transport accounts for around one-fifth of global carbon dioxide (CO2) emissions [24% if we only consider CO2 emissions from energy].1 In some countries – often richer countries with populations that travel often – transport can be one of the largest segments of an individual’s carbon footprint.

If you need to travel – either locally or abroad – what is the lowest-carbon way to do so?

In the chart here we see the comparison of travel modes by their carbon footprint. These are measured by the amount of greenhouse gases emitted per person to travel one kilometer.

This data is sourced from the UK Government’s methodology paper for greenhouse gas reporting, widely used by companies to quantify and report their emissions. Greenhouse gases are measured in carbon dioxide equivalents (CO2eq), meaning they also account for non-CO2 greenhouse gases and the increased warming effects of aviation emissions at high altitudes.2

Overall, the most efficient ways to travel are via walking, bicycle, or train.

However, there can be wide variation in emissions depending primarily on a) the length of your trip, b) the source of electricity in your local grid, c) the occupancy of public transport and d) in the case of driving — your vehicle and number of passengers.

Over short to medium distances, walking or cycling are nearly always the lowest carbon way to travel. While not in the chart, the carbon footprint of cycling one kilometer is usually in the range of 16 to 50 grams CO2eq per km depending on how efficiently you cycle and what you eat.3

What if you can’t walk or cycle, or you need to travel longer distances and can’t take a train?

Taking a flight or driving alone are the most carbon-intensive options. Between the two, which is better depends on the distance travelled. If you’re travelling moderate distances (<1000 kilometers or a domestic flight within the UK), then flying has a higher carbon footprint than a medium-sized car. If the distance is longer (>1000 kilometers or an international flight), then flying would actually have a slightly lower carbon footprint per kilometer than driving alone over the same distance.

The carbon intensity of your local electrical grid matters too. If your electricity is supplied by nuclear or renewable energy instead of coal, electric vehicles and electric rail are even more efficient. For example, France has a very ‘green’ electricity mix: more than 90% of its electricity comes from low-carbon sources – ~70% from nuclear. If you took the Eurostar in France instead of a short-haul flight, you’d cut your journey’s footprint by around 96%.4

When driving, your emissions will depend mainly on which vehicle you use and the number of passengers. Driving a small Mini car emits 111 g CO2eq per km while a large 4×4 car emits ~200 gCO2eq per km. Adding one additional passenger travelling to the same location would halve emissions per passenger-kilometer.

There are some nuances that you might want to explore for yourself: for example, what if I drive a small or a large petrol car; what if I fly business or first class rather than economy; what if I share my car trip with 3 other passengers? For this reason we’ve included the data for a number of additional options which you can explore in the interactive chart using the blue “Add travel mode” button.

Some general takeaways on how you can reduce the carbon footprint of travel:

Why is the carbon footprint per kilometer higher for domestic flight than long-haul flights?

You will notice that the CO2 emissions per passenger-kilometer are higher for domestic flights than short-haul international flights; and long-haul flights are slightly lower still. Why is this the case?

In its report on the CO2 Emissions from Commercial Aviation, the International Council on Clean Transportation provides a nice breakdown of how the carbon intensity (grams CO2 emitted per passenger kilometer) varies depending on flight distance.7 This chart is shown here – with carbon intensity given as the red line. It shows that at very short flight distances (less than 1,000 km), the carbon intensity is very high; it falls with distance until around 1,500 to 2,000 km; then levels out and changes very little with  increasing  distance.

This is because take-off requires much more energy input than the ‘cruise’ phase of a flight. So, for very short flights, this extra fuel needed for take-off is large compared to the more efficient cruise phase of the journey. The ICCT also notes that often less fuel-efficient  planes are used for the shortest flights. 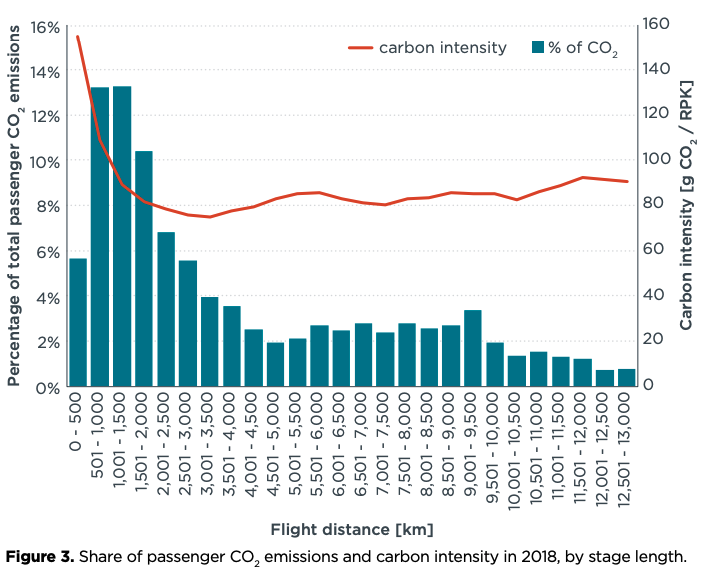 Page load link
We use cookies to ensure that we give you the best experience on our website. If you continue to use this site it will be taken that you are happy with this. For more information please read our Privacy and Cookies Policy page. OK
Go to Top